From the Sengoku period (c.1467-c.1568, Age of Warring States), when the Hojo clan of Odawara utilized the station for post-horses at Fujisawa Daigiri town in 1555, this place was already recognized as an important traffic point. In 1601, the Fujisawa post station was established as the Edo Shogunate created posting stations along the length of the Tokaido. Additionally, even before 1596, the Fujisawa Goten (Fujisawa Palace), a lodging facility for the Tokugawa Shogunate Family, was built in Fujisawa (closed in the mid-17th century).

The post station consisted of three towns, Daigiri town (Kamakura County), located on the east bank of the Sakai river, Okubo town (Koza County), located on the west bank of the same river, and Sakado town (Koza county).The total area covers from a mituske, the post-station gate on the eastern side of Yugyoji temple, towards Edo, to a mistuke on the eastern side of Daimachi, towards Kyoto (beyond today’s Odakyu Enoshima line train tracks.). 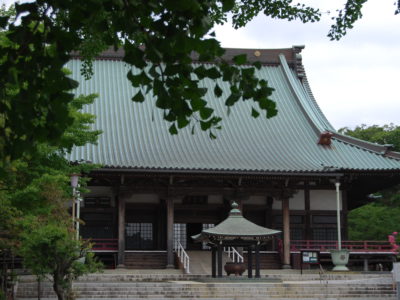 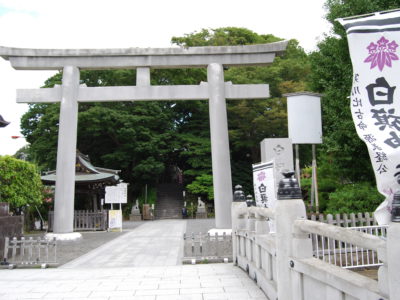 The representative scenic and historical sites of the time were (1) Shojokoji Temple (known as Yugyo-ji) located by the gate of the post station toward Edo (Tokyo), (2) Ichi-no-Torii (the First Torii ?Gate), symbolizing Enoshima Island (Enoshima Shrine), which was located about a ri (about 3.9 km/about 2.4 miles) away to the south of the post station, and (3) “Yoshitsune Kubizuka (a burial mound for Minamoto no Yoshitsune’s head) and Kubiarai-ido (the well where Yoshitsune’s decapitated head was washed)” located by the gate of the post station toward Kyoto. Both of sites were related to Shirahata Shrine (where Yoshitsune is enshrined). All of these sites were often depicted in ukiyo-e (woodblock prints) and written in dochuki (tourist guide books). Since there are several historic sites related to the story “The Legend of Oguri-Hangan and Princess Terute”, along with the pilgrims, many tourists visited Yugyoji temple. In addition, famous sites such as the tateba of Yotsuya (a rest station between post stations and a place to exchange manpower and horses), where the turn-off to Oyama Road is located, on the west side of the post station, and the scenic sites of Nango (present day Chigasaki city), such as Hidari-Fuji and the pine forests were often introduced in ukiyo-e, as famous sites of the Fujisawa post station.

The Former Fujisawa Post Station District in the Modern Age

Due to its function as the distribution hub of the region, the former Fujisawa post station district flourished even after the post station system was abolished at the beginning the modern Meiji period (1868-1912). In this period, “dealers of fertilizers for rice and grain field” gained capital in this region, by buying crops such as rice and wheat from the rural farms and providing fertilizer for farmers.?

By 1887, when a railway station (Fujisawa railway station) was built at the southern part of the former post station, the numbers of people traveling on foot had gradually decreased. The old post station turned into a wholesale street, and by utilizing the geographical convenience of the location, functioned as a place to distribute products to a wide geographical area. A bank was founded using local capital and this place became the core district for the regional economy. 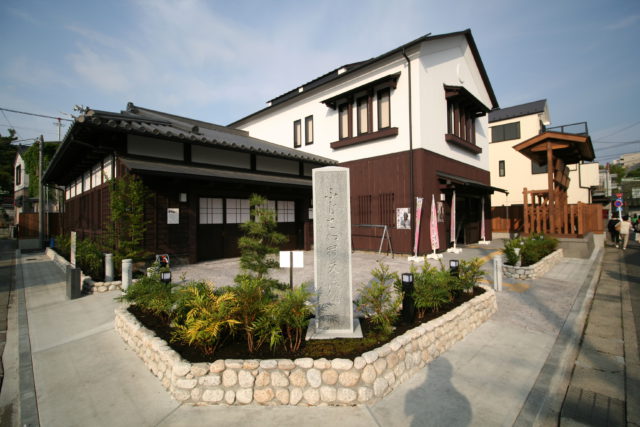 Later, the prosperity of the former post station district gradually declined due to the 1923 Great Kanto Earthquake and the Showa Financial Crisis which took place during the early Showa period (1926-1989) that led to the bankruptcy of the local bank. Fujisawa town of Koza county was newly formed in 1908 (a town formed by the merger of the old post station district, Kugenuma village and Meiji village) and as the southern part of the city became more well-known as a tourist destination and an area with a great number of holiday and resort houses, the center of the town gradually shifted from the old post station district to the southern part of the city, around Fujisawa railway station.